I recently compiled two 30+ minute talks in LaTeX Beamer. While the output of LaTeX usually is great, getting there is not. There are many things which can (and will) go wrong; many commands and techniques you only discover after a lengthy workaround; and, anyway, sigh, workarounds…!

The usual way to deal with any LaTeX insufficiency is to discover the solution in a post on StackExchange, you already read last week a couple of times. Or you read through some of the documentation and hope to find the solution in there.

Well, here follows a list of all the neat tricks I searched for, stumbled upon, or discovered myself. All somehow related to creating presentations in LaTeX: LaTeX Beamer, TikZ, and more.

Apart from producing slides for presentations, Beamer has support for handouts built in. Adding [handout] as a option to the beamer document class will initialize the mode.

To typeset a handout version from the same file as the presentation slides, without adding and removing [handout] all the time, I created a second file (ah-conference--handout.tex) and added the following line:

This will insert the whole content of ah-conference.tex into the file and pass the handout option to beamer. Typeset as usual 1, done ✓. 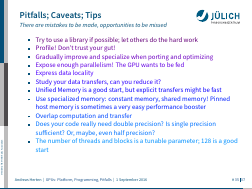 Beamer’s frame environment accepts a few optional arguments which I did not know of before. Sure, they are all listed in the documentation, but this document also has 250 pages…

For showing different, but connected images on the same slide, I choose Beamer’s overprint environment.

Imagine the \onslides as \items in a list of overlays. Additionally, the space the overprint requires on the frame is equal to its largest element (independent of the position in the range of overlays) – so no flipping around if a overlayed pictures is 2pt higher. Caveat: For handout, overprint must be manually annotated, since two \onslides must not overlap.

Beamer produces slides, which should be concise and without cluttered information. It makes sense that the default settings of many themes are optimized in that regard and remove certain pieces of information which available usually in vanilla LaTeX.

For large / lengthy presentations which go into a lot of detail, this might not be the intended outcome, though.

Calling a \caption{} macro inside a figure environment usually results in numbered figures. Not so in beamer (because captioning figures in slides usually is stupid).

I wanted to have a numbered figure in my appendix. For this, I needed to put the following into the preamble:

When using a bibliography, Beamer uses an icon of a document to illustrate an entry. This is alright if the bibliography is used as a read further here pool of supplementary information.

I wanted to use the bibliography to note where I took cited information and pictures from. This requires a referable number connecting the picture and bibliography entry.

The usual LaTeX behavior can be regained by adding to the preamble:

By means of the \addtobeamertemplate macro, Beamer allows adding to the title page. I needed this to put a »Preliminary!« disclaimer to my slides.

Exactly this is done by the following snippet.

Short Titles in Table of Contents

LaTeX allows to set a shorter version of a section’s title by given an optional argument to \section, i.e. \section[short]{Very long}. This shorter version is for example used in the table of contents. Unfortunately, Beamer has no such option.

Thanks to a StackExchange answer you can redefine the \section and \subsection commands to accept short titles. This uses \patchcmd{} of the etoolbox package.2

Placing Things into Background of Slides 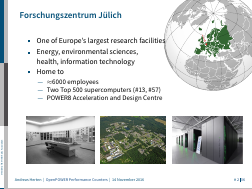 Sometimes it’s necessary to place content into the background of a slide. I used this to display a world map in the upper right corner of an introductory slide, which was gently overlapped by the remainders of a text block.

The macro \usebackgroundtemplate places its arguments into the background of all following slides. The following example limits the scope of the background modification to the next slide by enclosing it in curly braces:

Additionally I used \setbeamertemplate to remove all contents of the sidebar right group of the current scope. In my theme, this holds the logo; it might be called differently for your theme.

A frame can be named as usual by adding \label{frame:abc}. Unfortunately, this does not work reliably with \hyperref[]{}.

Sometimes, I have troubles with the left margin of slides. This is the case when I deviate from the usual bullet list style of presenting information and, for instance, show two lists next to each other via \begin{columns} (pro and con lists, for example). The spacing leftwards does not fit anymore in those cases.

For some reason (which I still have to find out) the environments I usually use in those cases ignore a preceding \hspace*{-1em}. Minipage, the knight in shining armor, does not.

The same can be achieved by a somewhat simpler \makebox, capuled into a command:

There’s a lot of learning involved when using TikZ. The following parts are just two (and some other) useful things. All the rest is sole learning by frustration.

A lot of TikZ’s macros are captured by Beamer’s chevron overlay specifications; i.e. \node<2-> is easy! But sometimes, an already existing node needs to be highlighted individually.

Sometimes, a simple \draw [\only<2->{draw=red}] {Hi!}; works. But I needed something more sophisticated.

The solution: Specify overlay and non-overlay styles outside of the TikZ picture and copy it to an status style overlay-dependent. Like this:

A solution to note a specific point in (continuous) text to refer to later on in a TikZ picture is a TikZ mark. It’s an empty, but labeled node at a given point:

The node can then later be referred to: \tikz[overlay, remember picture]{\node [draw=green] at (marked) {Hello!};}.

Cool: When using LaTeX Beamer, you can work with a glossary. For instance, to give people new to the topic a concise overview of all the technology involved in the topic.